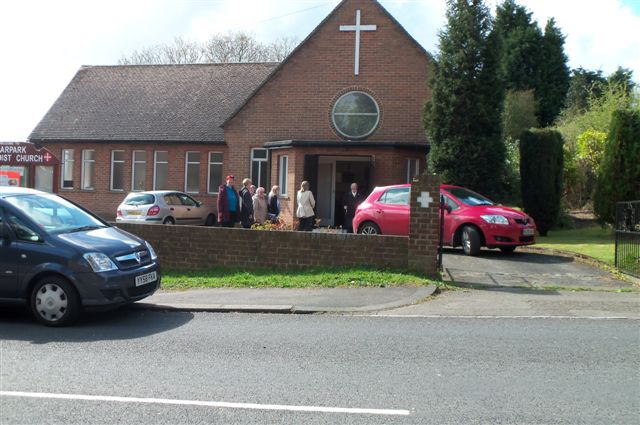 During the pandemic the services were suspended and  they are now being held at Brandon Methodist Church  at 10.30am

Worship – On a Sunday, we have a variety of different types of worship such as Traditional, All Age, Family and Cafe. We have 21 members but many others who join us for Special Services such as Junior Church Anniversary, Harvest, Christmas etc. We are young at heart, willing to try new ideas and lively modern songs as well as traditional ones. We are very friendly and warmly welcome all visitors to our services, inviting them to join us for tea and biscuits afterwards.

Sunday morning worship: In normal times, we worship at 10 am on a Sunday morning. However during the Pandemic, we have been worshiping at Brandon at 10.30 am together with people from Esh Winning and New Brancepeth.

Wednesday – 10 am Company & Crafts, a get-together of ladies sharing sewing, knitting etc as well as refreshments

Wednesday – 5pm Shell Group – a fun club for children 5-10yrs including games, crafts and other activities

Directions: Follow the A167 from Neville’s Cross, turn left at the traffic lights just past Sainsburys.  The road leads to Bearpark (and on to Ushaw College). Continue a short distance past the car showroom/garage, the chapel is on the left beside the Busy Bears Nursery and almost opposite the Community Centre which has a large steel wheel displayed.

History – Mining had been carried out in Bearpark area since the 1300’s when it was recorded that the Prior of Durham had pit workings at Beaurepaire (The Beautiful Retreat), a summer palace for the lordly priors of Durham on the banks of the river Browney. However, the development of the railway in the mid 1800’s made it easier to transport coal and iron ore. Industrialists then realised they could develop mining and so a local coal mine was opened in 1872.

Methodism – As the colliery developed, so did the need for workers who needed housing etc. and a community was established – this had spiritual as well as physical needs. Many of the miners were Methodists who initially held gatherings in their own homes but as these grew, larger premises were needed. Three Chapels were built beside the colliery – the Wesleyan Chapel was opened in 1883; the Primitive Methodist Chapel opened in March 1884 and the New Connexion Chapel opened in 1892.  Two buildings are still there although only one is in use as a house.    In 1963 the foundation stone was laid for the present Methodist Chapel which was opened in February 1964.

In 2014 we celebrated our 50th Church Anniversary in the current building.  The church was officially opened by Revd Miller on 29th February 1964.  Those involved in the design and building of the church, all those years ago, are to be congratulated as, in general, it has proved to be a very practical and easy building to maintain.  Although we no longer have the enthusiastic gardeners of the past, who were staunch members, and kept the grounds beautifully maintained, we still have loyal members using their gifts to continue God’s work in the village and surrounding areas.  Methodism has played a big part in the life of the village since the 1800s when there were three new chapels built with the help of funding from Bearpark colliery owners.  They were thriving churches attended by the miners and their families.  Sadly, like most local churches these days, we don’t have lots of people attending but we have a dedicated group of individuals, working as a team, to continue to have a Christian presence in the village.  To celebrate 50 years we had a special Anniversary weekend with Revd David Wilkinson and Revd Calvin Samuel leading events as well as having different events throughout the year to continue the celebrations involving those who, over the years have attended Shell Group, been married or baptised at our church, gone to Craft Group or the Ladies Group etc etc.

Since 2014 we have had various other activities.  We did a Prayer Mission in the village throughout a year dropping off Prayer Cards at every house to let them know we were praying for them and asking them to contact us (by mobile, email or letterbox) if they wanted any special prayers.  We followed this up with another Prayer Mission over a year praying for each street in the village through walking the street, putting on both outside and inside noticeboards, including in our Prayers of Intercession during Sunday worship and in individual personal prayer.

In the last two or three years we have started to do Open The Book in the local Primary School.  Several of us going into the school, once per month, and taking an assembly by telling a bible story through drama.  The school have also come to chapel at Easter and Christmas to hear the relevant bible story and do a craft activity.  In addition they’ve come for a Carol Service to which their families have also been invited.

Throughout the year we have several Coffee Mornings to support various charities like Fair Trade and Macmillan and have a Quiz Night for Christian Aid.  On an ongoing basis, we have a Traidcraft stall as well as supporting the local Foodbank.

We pray that God will continue to guide us throughout the years ahead and that through our various events we can reach out to others and share God’s love with them in this 21st century as our predecessors have done in the past.